Here’s a pic of my daughter helping me shoot a video walk through of my latest coloring book.  She also attached a song for my video in garage band.  She’s amazing! 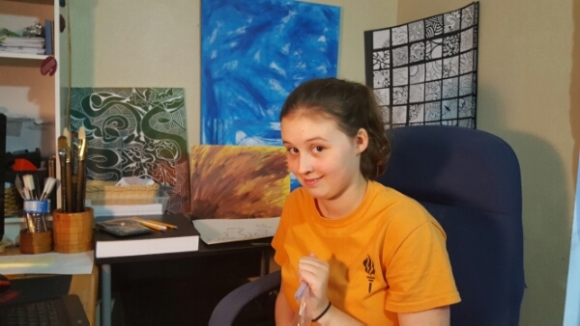 Took my Marvel girl to see Avengers.  She wanted to take the display home.

Tagged #2, Marvel Girl
Being a Dad

I walk into the kitchen and hear #3 exclaim: “You can’t use Wolverine because he can’t die!” Three of the kids (2, 3, and 4) are in a heated debate about which “human” Marvel character is comparable to the Joker from DC. They are testing their memory of the Marvel encyclopedia, which they have nearly memorized. #2 is done with her school and chores for the day so she’s lying on a bench arguing with #3 who is trying to climb out from underneath the mountain of dishes in the sink he left there since the morning. I ask 2 if she is helping her brother or making it more difficult for him to finish. She leans up and, with a big grin on her face says: “both”. I sense an ulterior motive here.

#2 got her first basketball injury.